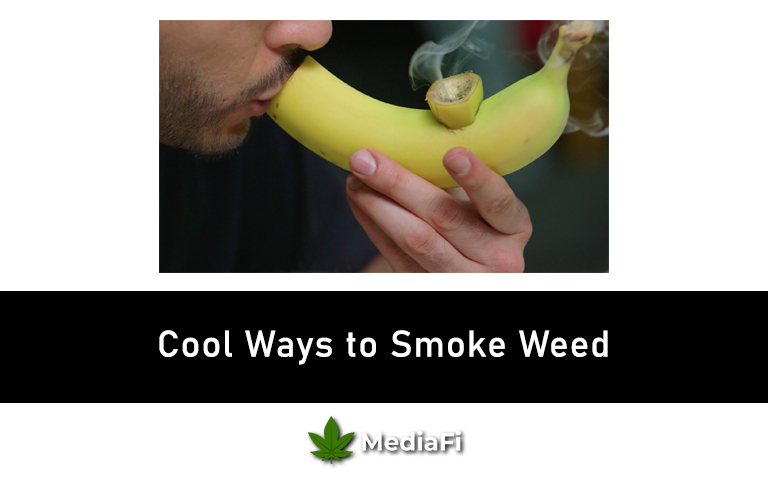 Ways of smoking weed has always been a question among marijuana users whether it is for recreational purposes or medicinal. Since we are all aware of the classic methods like joints, bong, pipes and many other instruments to enjoy your euphoric experience. Apart from these native methods of inhaling weed smoke, there could be many other creative and fun methods to put on the table to explore. Here we will discuss the most unconventional and “not so famous” ideas and methods to smoke weed. And when we talk about unconventional ways, that is to create sustainable methods which can be derived from your household like- leftovers fruits and veggies in the fridge, useless stuff from your dustbins. You just need to be creative enough to make usable things out of complete waste.

Have you ever thought about whether you can use an apple to smoke weed? The answer would be yes! You can easily use an apple pipe to smoke weed in a natural way. You just need to remove the core of the apple using a pen or anything resembling it to create a hole from top to bottom of the apple. And create another hole going from side at 90 degree to the midline. Cover the top of the apple with aluminum foil with little holes into it, and you are ready to go. This one is probably the oldest to smoke weed, still worth mentioning.

Though the apple pipe is not the same as bong. Unlike the Bong, an apple pipe makes it possible for the smoke to directly enter the lungs without being filtered beforehand. This is a great way to smoke when you have nothing to use.

Just like apples you can use numerous other fruits and vegetables such as bananas, carrots, watermelons and potatoes.

Smoking weed from soda can or any can, could be the simplest form of tool you can use to get high. This method is for people who want a simple and effective smoking experience. You just need to bend the can from the middle of it and make some holes at the base. Where you can put your stash and burn them, inhale it using the mouthpiece at the other end of the can. This could prove to be one unhealthy way to smoke, even though there is nothing wrong with using this method now and then.

Plastic bottles can be used in many ways to smoke weed from it. This unconventional method could serve many purposes apart from just smoking. By using plastic bottles, to some extent you will be contributing in reducing pollution as well as help to recycle plastic.

Plastic bottles can be used to make several tools for smoking weed such as gravity bong, waterfall bong or just a simple hookah.

For example, to make a gravity bong you just need a large plastic bottle and a bucket full of water. First you need to cut the base of the bottle so that it doesn’t replace the water while submerging in the bucket. Now you can put your bowl piece or some aluminum foil and burn the weed while pulling the bottle upwords.

As a result a vacuum would be created inside the bottle which will help the stash to burn out completely, capturing all the smoke inside the bottle. Now you can remove the bowl at the top and inhale all the good stuff while pulling the bottle back into the bucket. This method will give you an instant high without wasting any amount of smoke.

The same principle is followed in the making of waterfall bong but the process is a little bit different. To make a waterfall bong you just need to make a small hole at the base part of the bottle, which can be covered with your finger before filling it with water.

Now you can put the bowl piece with weed at the top of the bottle before releasing your finger. This process would again create a vacuum that will fill up the bottle with smoke which can be inhaled directly.

At first it does look like a primitive method to smoke weed or hashish, it may not be the trendiest way to smoke at home but it looks interesting to try now and then. For this, you just need two knives and a household stove. To smoke, you need to turn on your stove and place one knife over a burner. Once it is hot, place your weed or bud on it and squeeze them with the help of another knife and inhale the smoke. For centuries, this is how it was done in various parts of the world.

All the mentioned methods are the most classical ways to smoke weed. Some of them are trendy among marijuana users and some of them look more of an experiment. Is it not what we should be looking for, to find new and creative ways to enjoy our weed? Such unconventional and so-called cool ways to smoke would surely impress your stoner friends and open a whole new space to experiment with other methods as well.