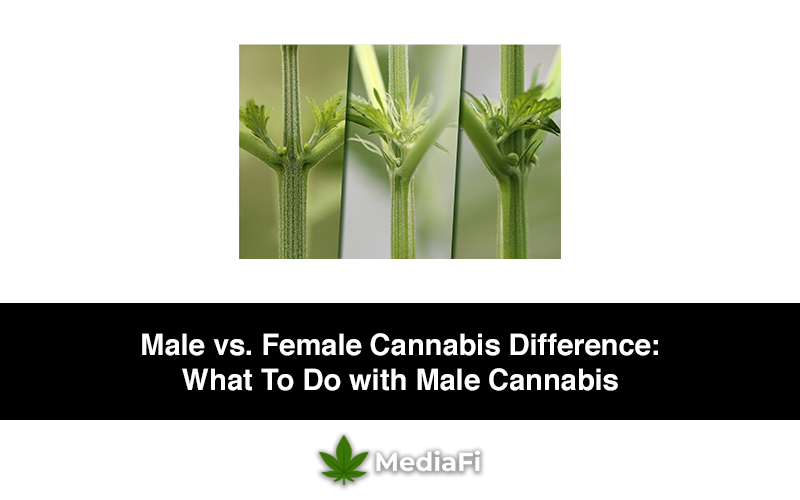 The guide aims to provide you with details on the plants’ anatomy for you to distinguish and learn. It will help you understand the difference, importance, and also the Use of male cannabis plants. Let’s dive into the gender world of high-spirited marijuana and cannabis, and let us discover male and female cannabis plants.

Difference between Male and Female Cannabis

Marijuana plants are dioecious plants, which means different plants have different reproductive organs classifying them differently into males and females. And sometimes hermaphrodite due to the presence of both male and female reproductive organs in one plant. A female cannabis plant produces flowers commonly known as buds, whereas a male cannabis plant produces pollen sacks. The pollen sacks pollinate flowers of female plants in order to produce seeds.

The difference between the gender of cannabis plants matters to growers and breeders and for different reasons. A breeder seeks different genetics; thus, male and female plants’ presence offers reproduction and plants and seeds of different genetics purposely and otherwise to breed together. A male plant is a must for reproduction to obtain seeds.

Both types of the cannabis plant and also the third one have two stages of growth, one is vegetative, and the other is flowering. Vegetative is a growing age, whereas flowering is adulthood. In the flowering stage, females, and males, both plants produce almost identical buds. The female produces flowers, and the male has sacs, as discussed above. If the male pollinates the female, the female plant’s flower will produce seeds in its flower for further reproduction. Whereas, if not pollinated, the flower of the female plant will grow into a bud full of resin.

When pollinated, the female bud, or more specifically, calyx, the plant’s reproductive organ, along with pistils that are hairy growth on the buds, catch pollen and dedicate their energy in producing seeds. On the other hand, when the calyx is not pollinated, it dedicates its whole energy in developing the flower, which we see on store shelves – high potent, rich in resin, and lots of THC and other cannabinoids.

Identifying male and female plants can be made at the pre-flowering stage, where both the genders produce flowers or buds to bloom and rupture. Male will produce ball-like or sac-like pre-flowers, whereas females have hairy that is thread-like pistils or buds. The sac bursts and releases pollen upon maturing, and the thread-like pistils of the female bud catch pollen in order to get pollinated.

The buds or pre-flower of males and females also look different on a structural level in many strains if examined closely. Other than the difference of presence and absence of pistils, a male plants’ sac will look roundish, and that of the female plant will look pointed out that is ready to bloom in the future.

Identifying these pre-flowers at the plant’s nodes that are between the main stem and branches will help you determine the sex of the plants and allow you the time of a couple of weeks to make the decision. Suppose you are interested in breeding and obtaining seeds. In that case, you can enable the male sacks to mature and pollinate the females, where after pollination, it will focus on the process of producing seeds rather than growing the flower.

On the opposite side, if you are looking for the cannabinoid-rich resin bud filled with THC, you should quickly remove the male plants not to get the female plants pollinated. A female plant will continue to grow flower-rich in cannabinoids if not pollinated, delivering the potent buds ideal for smoking and more.

On the other hand, the identification of plants differs from genetic to genetics and plants to plant. Within 3 to 6 weeks in the vegetative cycle, these plants’ flowering stage begins and the monitoring stage to identify male and female. However, this time differs with different strains and grows conditions that are light and temperature, which triggers the stages. However, it is easy to identify from naked eyes and a little knowledge.

However, intersex plants sometimes appear and can ruin your growth and feminized seed not growing into the female plant and the same with auto-flowering plants, so identification will still be preferred.

Well, when you identify the male cannabis plant, what exactly can you do with them?

If you are a breeder, you will be mostly breeding and crossbreeding genetics. Male plants hold quite an importance for traditional breeders to breed naturally and not through clones, and thus they are the scope of the future generation of the strain. On the other hand, growers will definitely remove them very quickly.

After removal, male cannabis is suitable for many things. Against the popular belief, the male cannabis plant does have THC content and can be used for recreational purposes. They are used to prepare hashish, the concentration of resin. They can also be used for other recreational purposes for their little but THC content in leaves, stem, and sacs. They do not offer high potency like female plants, but cannabinoids and terpenes make them useful.

Further substantial cultivation of male cannabis plants can be used for garden and land enhancement due to the plant’s qualities, like insect repellent and deep taproots that infiltrates the soil and improves it.

1. What is the difference between male and female cannabis?

2. How to identify the sex and gender of the cannabis plant?

3. Why remove the male cannabis plant?

4. What to do with male cannabis plants?

Male cannabis plants are often discarded due to low THC levels and potency. However, there are various uses and also significant. Male cannabis plants have THC present in leaves, stem, and even in the sacs that can be extracted and used for recreational purposes. The plant can also be used to obtain hemp for fabric and other applications and terpenes oil for aromatic oil, pest control, and more.

5. What can be done to avoid male plants in the cannabis grow setup?

To avoid having male plants in your grow setup, you can germinate feminized and auto-flowering seeds to get female plants and also plants that flower soon to be identified. The other widely used method is identifying male plants right at the pre-flowering stage and removing it from the growing area.

Cannabis, cannabinoids, and THC, along with gender perplexity, is quite evident in the cannabis growing culture. We hope that our guide has helped readers know more about these plants and why gender plays essential. So, now you can identify the gender on your own and make your decision about your grows. The plant world is already fascinating, and we hope it was a pleasure for the readers to know. Also, keep on learning about these fantastic plants from our articles and guides.